After Action Report / Review of Performance 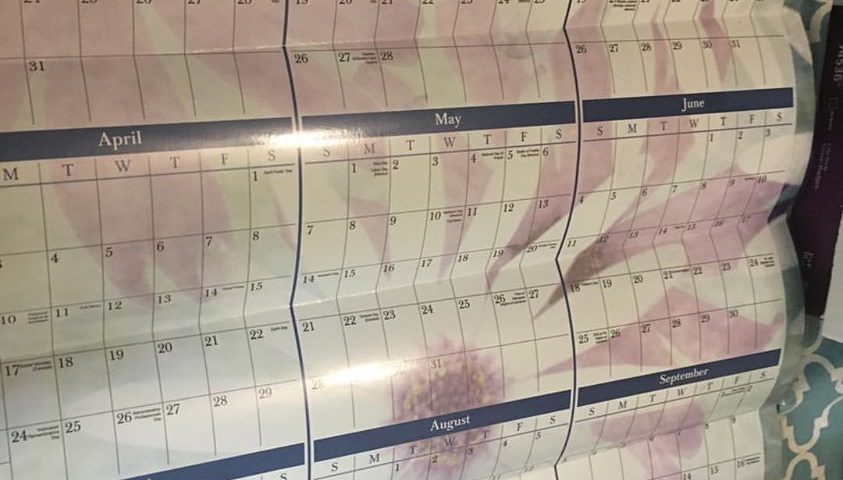 Work ethic.  It seems to be something that is eroding in general. Not a now and then, here and there kind of thing, but a more often than not kind of thing. As a business owner I deal with many different types of people.  As a corporate employee I had a different experience and in the military as well.  There are always going to be those who do the minimum possible to get by.  What I’ve noticed is that there are more and more people with that attitude or at least displaying behavior that makes it look as thought that’s their attitude. Some of it can be tied to overwhelm. Many people are doing more with less and they can’t handle the stress.  However in many cases it’s simply lack of working in excellence.  For example, lets take a simple purchase of a wall calendar. I order a wall calendar like this one every year so I can plan out my year and see upcoming events, marketing campaigns and deadlines at a glance.

The calendar comes laminated and is about 24 X 36. I put the double-sided poster sticky stuff on it to affix it to my wall.  This year I ordered my calendar far enough in advance (Prepare in Advance strategy from my Think Like A Negotiator Book). It arrived and much to my surprise it wasn’t rolled and put into the box. Instead it was folded about 6 times and stuffed into the box. The box itself was damaged and the calendar was creased. It was unusable. The box included a form with a number to call if the item was damaged. I called and the person I spoke with said they’d send one out in 2-6 days. I asked for expedited shipping (Ask for Exactly What I want from my book) and got 2 day express shipping instead. I was happy and looking forward to getting the new calendar on the wall so I can start visualizing 2017.

The calendar showed up today. The box that is came in was square like the first one.  I would think a rolled item should be in a round tube type of container but was encouraged when I opened it and saw it was rolled.  However it was damaged – again! It was crushed in multiple spots and on the ends. Sure, it’s only a $15 calendar, but how we do one thing is how we do everything according to some.  If that’s the case, how will the bigger jobs be handled if the smaller jobs are done incorrectly.  The cost to the company can be astronomical in those cases and a course correction needs to happen in order to avoid continued errors of this nature.

There are at least two possible issues happening with this:

If they don’t have pride in their job, it may carry over into other areas of their life.  Many people are frustrated, overwhelmed or unhappy.  However, Abraham Lincoln said it best “Most folks are about as happy as they make up their minds to be.” It’s a decision that we can make everyday and commit to keeping our mindset positive and be highly responsible and productive at work and in our own lives.

This is a lack of training to function as a high performing team or the lack of the importance of operating as part of a team. The employee may have been given the task but not shown how to properly carry out the task.  The customer service rep I spoke to ensured they would relay the message for the calendar to be rolled instead of folded.  That may not have carried appropriate instructions to put it in a tube type of container.  How could they screw this up twice?  That is indicative of a problem and system breakdown somewhere.

If people aren’t trained properly or the culture of the company doesn’t encourage excellence, this can cause a breakdown across the company resulting in lost productivity and the bottom line due to rework.

What is the solution? I’m not sure you can teach someone in a short period of time to have a better work ethic and take more pride in his or her work. This kind of thing takes time to correct because it is a systemic problem. If the culture overall doesn’t promote high quality work at all levels or make everyone feel part of a high performing team, this will continue to happen.

What are some minor things you can do in your own life to up level your own game?

The bottom line is training yourself to up level your game to do things more in excellence. As you start doing the little things they will carry over to the big things. Check out the Facebook Live video I did about this same issue.

What does this have to do with Thinking Like A Negotiator? This is about self leadership which is negotiating with yourself. If you can negotiate a better deal with yourself, you will craft better deals in other situations. The Power is in The Work!