2018 is the Year of Excellence

The Challenges Come in the Midst of a Purge 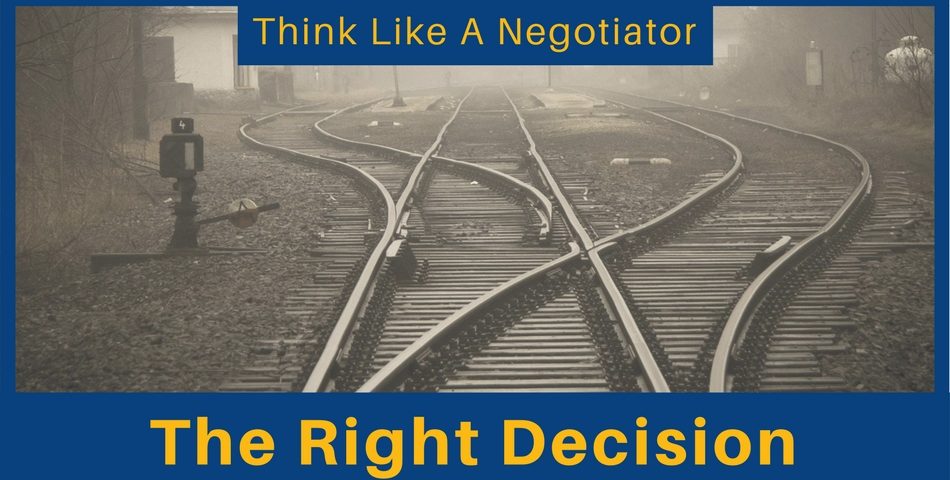 Think Like A Negotiator is all about becoming a better negotiator.  It’s knowing what to think and how to implement it.  Thinking is the first part of it.  You have to think it first in order to be it.

The only way to show past performance if you don’t have any is to team with someone who does.  So, I opened discussions with someone about teaming with them and we agreed to move forward.  We met on a call and started to work on the proposal. I had not gotten a teaming agreement out for this particular job although we did have one from past jobs and it would be a simple amendment to add this job.  We made plans to start doing work on the bid with my other team members as well.  I had invested energy and effort into the beginning preparations.  I was hopeful for the possibilities of getting this job.  I had lost about $5 million in bids last year including a job that was awarded to someone $100k higher than my companies bid.  I had teamed with this individual on that job along with many others.

There is an incumbent contractor for this job (contractor who has the contract now) who had subcontracted this team member on her contract.  Apparently, she reached out to him or he reached out to her and as a result she asked him to team with her after he and I had already started working on the same bid.

I got this email:

“The incumbent contractor that I told you about, who has the contracts for X and Y location, asked me if I want to partner with her for this current bid.  It’s a tough call for me because I want to work with you, and we’ve worked on a few proposals together, but she has given me some actual training days as subcontractor and we work well together.  I want to be open with you about what’s going on, but I haven’t decided anything yet.”

My response and why this response for me was the right decision:

“Thank you for letting me know.  I will make it easy for you and release you from any commitment to work with me.  I will also not be bidding.  I am sure you guys will win.  Best of luck”

This took me a few minutes to compile the right words.  I was upset and felt a bit betrayed.  This knocks me out of being able to bid. I could have said something like I asked you first and we had an agreement in place, but I didn’t and the reason I didn’t was that if he had to even think about which person to team with after we had already started to work on the bid with me, it was an easy decision to step out of it.

It should be an easy win for them and he went where what appeared to be the easy win and where the money was.  Unfortunately, today people will choose to walk away from commitments.  In the past, I may have done the same thing and can’t judge anyone for their choices.  However, this is the year of excellence for me and continuing to team with someone who had to send me the “I need to make a decision” email vs the “I already made a commitment to you even if this is a better deal” email makes it a no brainer for me to step aside.

He sent me this email a day after receiving mine releasing him: “Thanks Eldonna.  I really do want to get a new government contract with you that allows us to work together.”

I am not keen to work with him in the future. Trust has now been eroded with me and I won’t trust that he won’t do it again when another “better” offer comes along.  I am not likely to work with him in the future unless trust is restored but once trust has been eroded it takes a lot to rebuild it.  That’s the thing about trust.  It can easily be broken but is difficult to repair.  Just to be clear I have no resentment in fact I prayed a blessing for him and asked God to remove any of those feelings and have forgiveness.

You may be thinking that he didn’t actually bail on me.  He said he hadn’t made a decision yet.  He did.  He made it before he sent the email and used a negotiation strategy in a way to make me make the decision for him.  He was stuck in a conundrum of what to do since she asked him to team with her and the fact that he had to articulate that made it evident that he was wanting to step out of the commitment with me. I did not want to go forward because his desire was obvious to go with the other contractor.  Otherwise he would not have reached out to me with the first email.  He would have turned her down and told her he had already made another commitment and either told me about it or not.

What would you do in this situation on either side?  I would love to hear your thoughts. It’s always great to take a look in the mirror to see how you would react and what you might do if faced with the same thing.

In the past I have made all sorts of bone headed decisions that have probably left others doubting my integrity.  I think we all have.  I am thankful today that I am a different version of me and while my past is riddled with mistakes and surely my future will have mistakes too, I can strive to work in excellence in every area of my life so those instances caused by me will be few and far between. That’s my goal for 2018.

My new book “Think Like A Leader, Ten Self Leadership Lessons for Leading an Engaged Life” that will come out this year has trust as one of the life lessons.  This is a great distinction to use for that lesson.