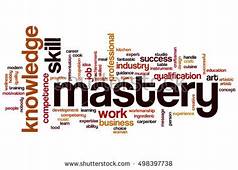 The definition of mastery is comprehensive knowledge or skill in a subject or accomplishment: control or superiority over someone or something.

You may have heard the term used with experience such as master teacher, master craftsman or Grandmaster and Master which are titles used to describe or address some senior or experienced martial artists.

I use the term in negotiation. I am a master negotiator based on my 30 plus years of experience. One of the distinctions I often use in my trainings is “Repetition Creates Mastery” which means you get better the more you repeat the task you are wanting to master. There is a theory in my company called the “Dynamic Vision Lightswitch Theory” which says you can’t flip a light switch to become an expert at anything. To think you can start something today and become a master at it tomorrow is a stretch to put it mildly.

While there are some people that can become good at something relatively quick, those people still won’t do it overnight. There are no shortcuts. The Power is in The Work. The failure and success are in the work. You have to fail in order to master something but we have this idea that it’s a terrible thing to fail. We are expected to be an expert overnight or we are a failure, but this is false.  You have to allow time to master anything and be ok with failing.  It’s part of the journey.  Mary Kay Ask of Mary Kay Cosmetics said “Fail Forward to Success.”  Fail, course correct then reengage.  Failure is not a bad thing although we’ve been led to believe it is with the way people are berated for failure in the “court of social opinion.” I would tend to agree that you can’t be a top ballerina doing the difficult turns on pointe in a few months.  Having taken dance myself and also watching my daughter progress through ballet, it’s not something you can master at that level in a short amount of time in my humble opinion.

Mastery takes time. The fallacy of the overnight success is oftentimes found to be many years of hard work in order to get there. I didn’t become a professional speaker overnight. I started speaking the end of 2006. Although I had given briefings in the military, I was not doing public speaking. In the last several years I have been a main stage speaker to audiences of hundreds. In 2007 I had my first experience with an audience of 300. I didn’t do so well because I was nervous and didn’t have enough experience with how to move the audience and keep their attention. As a result my presentation didn’t go as well as I would have liked. Recently I was in front of about 1,000 people (pictured above) and started my presentation from the audience sitting in a chair. The confidence and skill required to do that and walk to the stage while sharing my opening and getting it exactly timed to where I needed to be on stage is a skill that only came through intense training to get to that level of mastery. I will go back and watch the video to see how I can improve further to take the mastery even higher.  Mastery doesn’t mean stopping, you keep going to get even better.  We should never stop learning or doing things to improve. I started an acting class in January. I have never had any acting training. I didn’t do any acting in school as a kid, not even in a school play because I didn’t want to be seen. That came from my upbringing. I took some improve classes a few times when I started speaking and decided this year to take the acting classes to help me become a better speaker.

My first month in class I wanted to quit. We meet once a week and although I’ve missed a couple of months this summer from my trip to Kenya and doing other speaking engagements, I have been going regularly every week. During my first month my “self talk” kept telling me “what am I doing here? I’m in way over my head. These actors are all so accomplished and experienced. I don’t belong here.” That was my communication with myself because I was nervous, lacked confidence in my abilities and was doing something totally new that I’d never done before.  Acting is nothing like speaking even though both are performing in different ways.  I had to learn an entirely new set of skills.

I kept coming back despite the feeling of wanting to quit. That’s the key to success in anything, keep coming back even if you feel like giving up. It’s the perturbation decision point. Perturbation is that pressure you feel when you are uncomfortable. Believe me, I felt extremely uncomfortable.  There’s a saying that says “your first is your worst”  and another one that says “dare to suck.” If you realize the first time you do something is the worst you’ll ever be and you can improve from there and go in without any judgement on yourself and dare to suck no matter what, you will progress faster than if you get in your own way with your negative self talk.  You can do one of two things. Either turn and run away and stay where you are or push through the discomfort and transform to another level. What will you choose? In the beginning, I needed a lot of time to memorize the lines. It’s not a muscle that was well developed in my brain. I also needed to work on being less “actory” and being more natural. Now it’s improving and although it’s a challenge I keep working at it to make that muscle in my brain get stronger. As I think about it, it’s the same thing that I had to do as a speaker. I had to work on sounding less rehearsed and more natural. It came from experience. Today as a speaker if someone told me to go speak right now, I would be able to do it with ease.  That wasn’t true in the beginning and that came from my experience mastering the skill of speaking.

Saying it’s a challenge isn’t a “story I’m telling myself.” It’s me accepting that I’ve taken on a challenge that I’m going to have to work at to get good.  You do have to determine if the self talk in your head is or is not a story you are telling yourself. We can tell ourselves stories to keep from advancing.  Your language is very important, especially what you say to yourself. However, to expect you are going to master something instantly by simply telling yourself you are is unrealistic. Mastery comes from experience; experience only comes from doing it over and over again. There are no shortcuts to the work.

I wish it could be fast.  We’ve unfortunately been told in our microwave society that everything should be fast. It won’t be, so stop beating yourself up because you aren’t an instant overnight expert at something. Be ok with the time it takes to master something. Don’t avoid doing it because it’s going to take some time. The work is part of the journey both successes and failures. Then when you become a master at something and people say wow where did you come from? You are an overnight success! You might tell them that really The Power is in The Work and you did The Work to have The Power to master that which they acclaim overnight success.