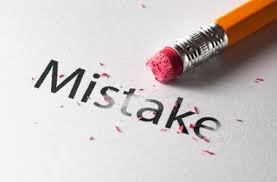 One Mistake Society – Mistakes, we all make them. That’s why there’s feedback to correct mistakes we’ve made. We are human, we are not perfect, mistakes are going to happen.
Feedback is an important part of life and taking feedback and evaluating it is a great way to move toward constant and never ending improvement. There is a good way to give feedback and a bad way to give feedback.  Being on the receiving end of feedback can be painful or positive.  It depends on how it’s given.
Unfortunately there are people who thrive on beating up on people who make mistakes. Look at what happened in the Build A Bear incident and how the public went on the attack for a mistake.  If you don’t know about that, here is the CEO discussing it.

Here was the post I put on Facebook about this when I was in Kenya serving people there:

“Normally I keep my comments to myself about things going in in the media. I guess since I’m here in Kenya serving people who don’t know if they’ll eat THIS WEEK, be able to send their kids to school or get medical care my perspective is magnified.

So Build A Bear planned a special promotion. They didn’t expect to have huge crowds the size that gave authorities concerns about crowd control. So as a result of the authorities direction they had to cut the lines short and turn masses of people away.

Ok disappointing I’m sure, but you can always expect some kind of consideration when the company is unable to fulfill a promise. What happened was a social media attack and parents upset because their child was crying or throwing a tantrum because they didn’t get a bear.

I’m sorry I don’t understand that level of anger over not getting a thing. Disappointments happen in life and it’s a great teaching moment for parents to share that with their kids and go do something better than standing in a line for hours to make a bear.

If it were me I wouldn’t have wasted my day with my kids doing that but had I done that and seen such massive lines I would have said let’s go to the park, the movies, Color Me Mine or somewhere else.

To be so angry and outraged to spew hate and anger on social media about it and attack the CEO the way people have is appalling to me. Have we become so entitled and so unacceptable of mistakes that instead of adapting and overcoming the situation, we blame, destroy and shame others to make ourselves feel powerful? I think many people need a mindset overhaul in my humble opinion.”

I could not believe the vile attacks over not making a bear.  The police closed down the lines for crowd control reasons.  OK it was a mistake, why do we have to attack people for an honest mistake?  Plus they offered some consideration for people to still be able to go back to get a bear.

A personal mistake example – I was a speaker at a major event.  I had a small half sheet card handout done for the event.  I failed to proofread it and there was a typo and one too many negotiation strategies on the card.  Had I looked at it before I spoke I might have avoided the onslaught of people who spent the next day and a half telling me about my mistake.  I could have handled it from stage.  My fault, feedback for next time.

I had people wait in line that were suppose to be there buying my book or thanking me for my talk but instead they waited to talk to me about the mistake. Someone thought they would tell me how I could have better handled it as a speaker and wanted to coach me on speaking (mind you they weren’t a professional speaker) and people chased me down to tell me about the typo at the event.  Many people complimented me on my talk and told me they got so much out of it which I was glad but many people may not have heard it for the mistakes I made on the handout.  They focused their energy on that instead of the positive things I presented.  Some made a quick compliment and then went on a long time about the mistake.  They didn’t do it in private, they did it in public with more people joining in saying “yeah I wondered about that.”  Yes I was embarrassed that I had to handle it in public and upset for not catching the error.  However, I was more saddened by the way the feedback was handled.  Here are 3 ways to handle feedback that all should consider before giving advice:

These are a few tips on giving and receiving feedback.  I’m teaching some Government courses on feedback to an Army group in coming weeks so have been researching this topic and thought I would share some thoughts that might help you.