This was posted several years ago but the relevance is still current.

Verify the facts, sounds simple enough. However there are those who take things they find online as the whole truth and nothing but the truth. Take for instance the following quote:

“85% of your financial success is due to your personality and ability to communicate, negotiate, and lead. Shockingly, only 15% is due to technical knowledge.” Carnegie Institute of Technology. 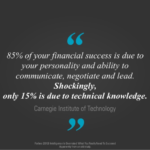 When I first discovered this quote, I was elated. It is exactly everything I teach; negotiation, communication and leadership. It was perfect to see it all in one quote and also that it came from the Carnegie Institute.

I recently saw a briefing from a congressional representative’s office that contained this quote and it’s also making it’s way around Linked In which is the first place I saw it.

Seeing it so many credible places would lead one to believe there must be some truth to it. That’s a problem we face in today’s online world. A quote can be put into a graphic and circulated and the more we see it, the more it solidifies it’s so called truth. The graphic above appears to have been pulled from Forbes.

This is where the importance of verifying the facts comes into play. Too many times people will present facts in a way that makes it believable. More times than not when I start to research the information, I find many false truths exist about the “facts” that have been presented.

My negotiation mind will not allow me to accept something like this without verifying the facts to see where it came from. This is one of the strategies in my Think Like A Negotiator book – “Verify the Facts.”

Unfortunately after doing some research I found the Carnegie institute indicated this information to be “extrapolated” (made up) from data that was in a report from 1918 on A Study of Engineering Education by Charles Riborg Mann.

A search of the report neither finds negotiation, nor the percentages indicated.
Based on the report; this quote is much closer to what the report is actually saying: 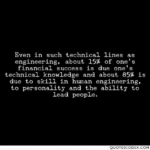 The report has some discussion about personality and human engineering. Apparently, someone “translated” that to mean negotiation, communication and leadership , which are definitely parts of the “human engineering” idea. Unfortunately neither quote is an exact match from the report.

Now that I know this is not factual, the person from the congressional representatives office now has less credibility because they used this quote in a briefing to a group of business owners. This being the second time I’d seen it in a week and since I teach those topics, I went on a search to find the truth and was disappointed to find it wasn’t even close.

I may still use this in a presentation but attribute it as extrapolated from a report and put the factual information in there but still use it as the importance of negotiation, communication and leadership in our lives. Perhaps I will line out the Carnegie Institute and put Eldonna Lewis Fernandez as the source!

You can find more detail about the report and its actual facts in this article:

Now lets look at another statistic that has been misrepresented for years: 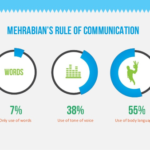 If you Google the above percentages you will find page after page of information about the Mehrabian study. I first saw these percentages used in a seminar in 2008 as the gold standard for communication as a speaker. It was repeated at seminar after seminar as the factual data for how a speaker is received by the audience.

However, the statistics for that information are not only flawed, but completely un-factual in the context it was shared in.

From Wikipedia: The information is based on two studies reported in the 1967 papers “Decoding of Inconsistent Communications” and “Inference of Attitudes from Nonverbal Communication in Two Channels”. Both dealt with the communication of positive or negative emotions via single spoken words, like “dear” or “terrible”.

The first study compared the relative importance of the semantic meaning of the word with the tone of voice, and found that the latter was much more influential. The second study dealt with facial expressions (shown in black-and-white photographs) and vocal tone (as heard in a tape recording), and found that the relative contributions of the two communication channels had the ratio 3:2. Mehrabian then combined the results of the two studies to obtain the ratio 7:38:55.

There are several limitations of the study’s applicability to real life, which are largely ignored when the study is now cited outside a scientific context and contribute to the misinterpretation above.

First, it is based on the judgment of the meaning of single tape of recorded words, i.e., a very artificial context. Second, the figures are obtained by combining results from two different studies, which are inappropriately combined. Third, it relates only to the communication of positive versus negative emotions. Fourth, it relates only to women, as men did not participate in the study. Fifth, other types of nonverbal communication, e.g., body posture, were not included in the studies.

I’ve used 2 examples that are prevalent both online and in presentations and discussion. They have been used extensively as erroneous examples of half truths or partial facts. They are examples for the importance of verification of any facts presented to you. When someone presents facts as part of a discussion to reach an agreement, you should always verify. Facts can be used to sway a negotiation one way or the other. If the facts are inaccurate, decisions can be made based on bogus data.

Verifying the facts also gives you more power in the negotiation. If you find something that is not factual, you can call them on their stuff and potentially gain a concession. If the facts are so egregious, it may be a reason to pull out of the negotiation or deal.

I was helping one of my clients recoup their security deposit. The landlord said the useful life of the carpet is 12 years and that the carpet was just about 12 years old. They said since the carpet was damaged, my client was responsible for replacing the entire carpeting in the house. However, upon verification of the facts, the useful life rule is between 7-10 years, not 12. Had I not verified this fact, she may have been stuck with paying for the carpet.

Just because someone else is in a position of authority doesn’t mean they know all the facts. Ask to see the policy, procedure or regulation. Or better yet, look it up yourself. Use this strategy to ensure you are getting the best deal possible in your negotiations and never get ripped off again.