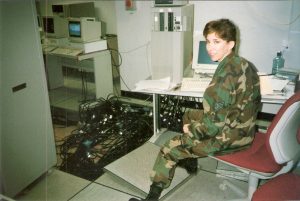 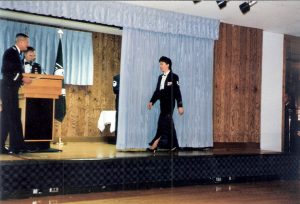 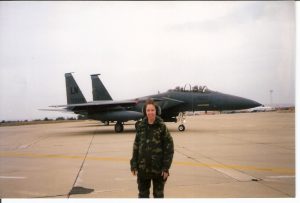 Here are a few examples from the Air Force Instruction: 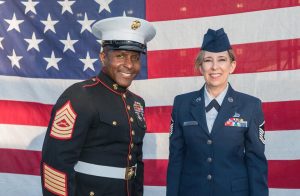 Honorably discharged members who served during World War II wear the Honorable Discharge Emblem on the left lapel. 12.6.1.2. May wear full-size or miniature medals on civilian suits or equivalent dresses on appropriate occasions such as Memorial Day and Armed Forces Day. 12.6.1.3. May wear the uniform at military funerals, memorial services and inaugurals. 12.6.1.4. May wear the uniform at patriotic parades on national holidays, other military parades or ceremonies in which any active or Reserve U.S. Military unit is taking part. 12.6.1.5. May wear the uniform on any occasion recognized by the Secretary of Defense in DODI 1334.1 or when authorized by law.

Also another provision for actors:

While portraying a member of the Air Force, an actor in a theatrical or motion-picture production may wear the uniform of the Air Force if the portrayal does not tend to discredit the armed forces. Refer to Title 10 U.S.C. Section 772 (f). 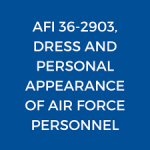 If you google “Stolen Valor” you will find a wide array of articles, videos and images.  Many people don’t understand what Stolen Value really is and they inappropriately accuse people of Stolen Valor. Then there are those who are actually violating Stolen Valor laws, use if for personal gain and don’t get anything more than a smack on the hand for it.  However, some actually get arrested and convicted. Below are some of the images of stolen valor.  The guy in the middle was arrested because he was falsely identifying himself as a Navy seal and asking people for money. The guy in the Air Force uniform has entirely too many ribbons worn wrong, and too many badges worn wrong. I’ve seen many articles about the guy on the far right and his uniform flaws and stolen valor. 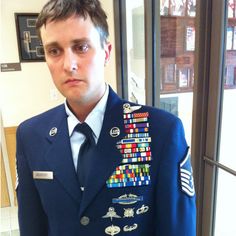 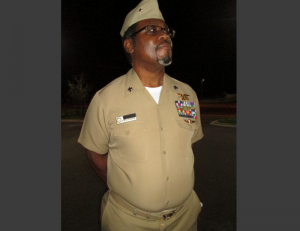 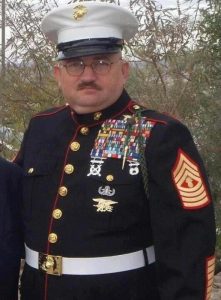 The Stolen Valor Act of 2005, signed into law by President George W. Bush on December 20, 2006, was a U.S. law that broadened the provisions of previous U.S. law addressing the unauthorized wear, manufacture, or sale of any military decorations and medals. The law made it a federal misdemeanor to falsely represent oneself as having received any U.S. military decoration or medal. If convicted, defendants might have been imprisoned for up to six months, unless the decoration lied about is the Medal of Honor, in which case imprisonment could have been up to one year. In United States v. Alvarez the U.S. Supreme Court ruled on June 28, 2012, that the Stolen Valor Act was an unconstitutional abridgment of the freedom of speech under the First Amendment , striking down the law in a 6 to 3 decision.

Wow. Alvarez actually took this to the supreme court to have it shot down because of freedom of speech and won? Asinine in my opinion, but not surprising. Alvarez introduced himself as a retired marine and said he was a Medal of Honor recipient. He lied, he got busted and basically said this violated his right to freedom of speech and the law was unconstitutional. The Stolen Valor Act got knocked down because of this. 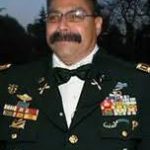 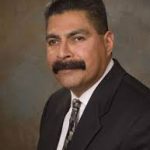 That just basically says Stolen Valor is no big deal and people should be able to make up any stories they want about being in the military, wear a uniform and say they were in the military or claim they are a decorated war veteran and it’s ok. It doesn’t matter that multitudes of people died for our right to freedom of speech but this is how we want to thank them?

Here’s a great article I found along those same lines (please excuse the use of some foul language, the points in the article are very good)

The Stolen Valor Act of 2005 was shot down in 2012. So a new bill was introduced and President Obama signed a new act with basically the same language in 2013 and it still remains.

The Stolen Valor Act of 2013 (Pub.L. 113–12; H.R. 258) is a United States federal law that was passed by the 113th United States Congress. The law amends the federal criminal code to make it a crime for a person to claim they have served in the military, embellish their rank or fraudulently claim having received a valor award specified in the Act, with the intention of obtaining money, property, or other tangible benefit by convincing another that he or she received the award.

The current federal law is a revised version of a previous statute struck down by the Supreme Court of the United States in United States v. Alvarez. In Alvarez the Supreme Court ruled the arrest and prosecution of a citizen for wearing unearned military awards, who did so without criminal intent, violates their constitutional right to freedom of speech.

The Stolen Valor Act of 2013 amends the federal criminal code to rewrite provisions relating to fraudulent claims about military service to subject to a fine, imprisonment for not more than one year, or both for an individual who, with intent to obtain money, property, or other tangible benefit, fraudulently holds himself or herself out to be a recipient of:

and here is the abbreviated language in the bill: 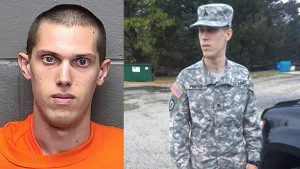 See this story from New Jersey: about this guy in the photo.

Australia, Canada and the UK include wearing the uniform as part of their laws about military imposters.

Massachusetts Pennsylvania, and Texas are some states with similar stolen valor laws. I would guess there are more but there isn’t a comprehensive list of them that I could find.

I live in California and we have our own Stolen Valor law (which is probably why the Alvarez case got shot down by California courts). The California law outlines certain crimes and includes a provision that elected officials will forfeit their office should they be convicted of Stolen Valor (we should have that as a Federal law – see Stolen Valor no big deal article where it mentions a politician made a false claim and still got elected).

Military regulations in the US prohibit the wear of the complete uniform other than while on active or reserve duty and those provisions for retirees or honorably discharged veterans to wear at special events etc. 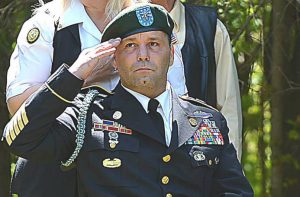 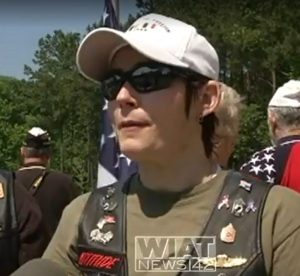 And if you think women don’t do it….guess again.  There may be less instances but here’s one and the interview shows why it makes those of us who served upset.  http://www.rightthisminute.com/video/stolen-valor-julee-johns-marines?page=4

Look close at the below photo of me when I was at The Talk show a couple years ago where most of the audience were veterans. I’ve eliminated the persons face but she is wearing what was probably her army uniform as a jacket over her dress. Her hair is down and she thinks she representing her service but it’s not an authorized way to wear the uniform. This isn’t appropriate or proper. It is not authorized in any way shape or form and should not be worn like this. 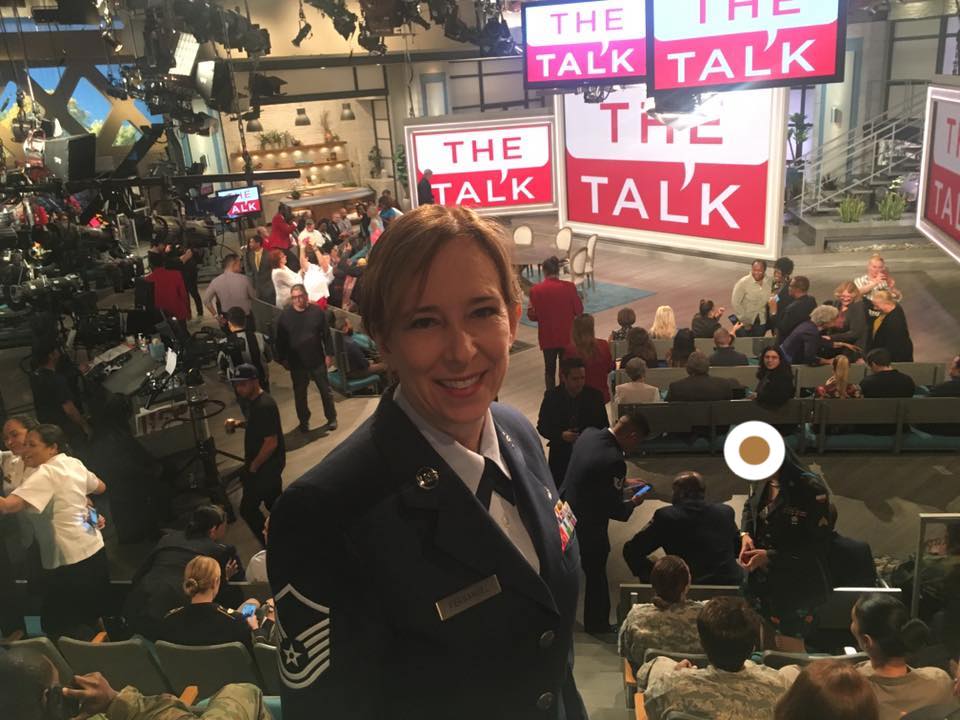 I am wearing the uniform properly. This is the uniform combination I wore at my retirement ceremony (same one, proud to say I can still fit into it after retiring in 2003) and I am authorized to wear it. I can include a retiree pin on I if I want to. My hair is up off my collar and you can’t see it but I’m wearing authorized shoes and I had a hat to wear when I am outside as required.  If you look around the photo, you can see many more examples of women with their hair up and wearing their uniform properly.

Many people died for that uniform. We took an oath willing to give our lives and went through extensive training and committed to a certain way of life. Some went beyond that level of training to be in a more elite force. We earned the right to wear that uniform and anyone who wears it flippantly or as a costume or like it’s a piece of fashion clothing is showing disrespect to those of us who served and took that oath.

It might not officially be called “Stolen Valor” but to those of us who served it feels like it and we would appreciate it if you did not wear our uniforms with the rank, name tapes and patches or medals/decorations or other insignia as if it were any other piece of clothing.

Mastery Monday – How to Negotiate Around a Porch Pirate